This will be my last NBA Hot Sheet article of the season. It becomes increasingly difficult to produce an article for an ever-changing NBA slate with late scratches and injury news at this point in the season. I will also be on vacation part of next week (Vegas baby!) and the MLB season is just around the corner as we shift our primary focus there. So, with that here is a freebie final edition of the NBA Hot Sheet for Friday’s seven-game slate. Hope you enjoyed the column this season and watch for my On the Hill column during the upcoming MLB season.

Sign up for a FREE 7-day trial to get all of the great content here at DailyOverlay. 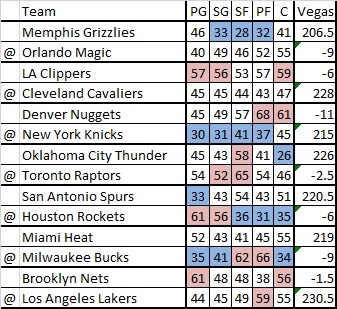 Russell Westbrook (OKC) – Westbrook and the Thunder just played the Raptors in their last game. He proceeded to put up 42 points, 11 rebounds, and six assists against the Kyle Lowry-less Raptors. The Raptors will likely be without Lowry again on Friday, not that you need any extra incentive to plug Westbrook into your DFS lineup.

D’Angelo Russell (BKN) – Russell will be very popular on Friday’s slate. His salary is reasonable for a player that just went off for 44 points and 12 assists. Russell will also return to L.A. for a matchup against his old club, the Lakers on Friday. In a previous meeting this season, Russell dropped 22 points and 13 assists on the Lakers. A red-hot Russell in a #revenge game, yes please.

Clint Capela (HOU) – Capela has owned the Spurs this season, averaging 20.0 points and 17.3 rebounds in three previous matchups. He has also been playing well recently with a double-double in seven straight games. Look for Capela to notch his eighth straight double-double and cruise to another big game against the Spurs.

Pascal Siakam (TOR) – Siakam just torched the Thunder in their last game with 33 points, 13 rebounds, and six assists. Expecting a duplicate effort two days later might be a little bit of a stretch but Siakam has shown this season that he is a force with a solid floor and big upside. The Thunder have allowed the 12th most points and 5th most rebounds to PFs this season.

Montrezl Harrell (LAC) – Harrell has scored at least 20 points in five straight outings. He has also posted a double-double in three of his last four outings. He gets a favorable matchup against the Cavaliers on Friday in a game with one of the highest Vegas totals on the slate.

Fred VanVleet (TOR) – With Kyle Lowry expected to miss another game on Friday, VanVleet should draw another start and be a strong DFS option. VanVleet had 23 points and six assists in his last game, sans Lowry, against the Thunder. He proceeded that effort with 13 points and 12 assists. VanVleet’s salary remains too low for his current role and production with Lowry out in a matchup we just saw him succeed in.

Mario Hezonja (NY) – Hezonja has played at least 26 minutes in three straight games for the Knicks. In those outings, he is averaging 16.0 points and 5.0 rebounds per game. The depleted Knicks roster should push Hezonja into 25-plus minutes again on Friday against the Nuggets.

Delon Wright (MEM) – The Grizzlies might not even have enough warm bodies to field a lineup on Friday with numerous players out including a doubtful Mike Conley. That should open up huge minutes for the remaining players, such as Justin Holiday, Bruno Caboclo, and Delon Wright. Wright played 41 minutes in the last game while contributing nine points, three rebounds, four assists, and two steals. He should get some extra scoring opportunities on Friday if Conley is out.

Justin Holiday (MEM) – Holiday logged 39 minutes in the last game and while he doesn’t post huge numbers that kind of volume of court time and some increased shot attempts without Conley should lead to a solid fantasy effort at a cheap price.

Bruno Caboclo (MEM) – Caboclo will benefit from the same lack of players for the Grizzlies on Friday. In his last game, he saw 41 minutes while putting up 15 points, seven rebounds, and three assists for 27.75 DK points. I’d give him priority among the cheap Grizzlies due to his scoring ability.