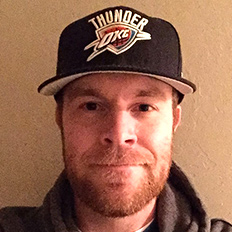 Stephen “oreojenkins” Moriarty is a professional poker player from Oklahoma City, OK. He has a J.D. from the University of Tulsa and a B.A. in Political Science from the University of Oklahoma. Even though he only recently began playing DFS (September ’14), he’s already had a fair amount of success; having won a WPT Bellagio Five Diamond Classic package during football season as well as besting a field of 30,000+ players to win the NBA Sharpshooter, both on DraftKings.