A full boat of games for this Friday. Three pitchers come highly recommended tonight as Nola, Arrieta and Cole have all been picked by at least nine experts. Two big stack options with the Mets and Astros.  Additionally, can the Indians keep up the run they’ve been on this week?

If you are a fan of this Industry Expert Consensus article then you will love our newest feature only available to Email Subscribers, called the “Weighted Consensus”. In the Weighted Consensus, we provide a more in-depth version of the MLB Consensus that take into account each expert’s current DailyOverlay scored to generate weighted rankings. If you have ever wondered how to differentiate between two players that were selected by the same number of experts then this is the tool you need. We also list all players selected by at least two experts. Sign up now for a small fee and get emails for this feature as well as the rest of our free content.

Scroll to the bottom of the article for the “Top Stacks” section that lists out the teams with the most hitters being recommended by the experts today. Also, be sure to check each team’s lineup when it is released and watch the weather before finalizing your lineups tonight.

Top Stacks of the Night 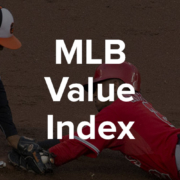