I’ll be honest, that doesn’t really look like a bunker to me either, Dustin.  In any event, the PGA Championship returns to Whistling Straits this week.  The course is a tough par 72 that may or may not actually favor bombers.  What we do know for sure is there’s sand and fescue everywhere.  If you miss the fairway,

You’ll want to target some combination of distance, accuracy/ball striking, and scrambling, but more on that later.  Whistling Straits has previously hosted the PGA Championship twice (2010 & 2004).  Let’s have a look at the top-10 from 2010.

There’s a nice mix of styles in that group.  Some long hitters, some tacticians, some whatever a WC Liang is.  One thing’s for certain, with the exception of Elkington and Liang, you have nine of the best golfers in the world at the time (Camilo was good at one point, I swear.)  “So you’re telling me I should target elite golfers in majors?  Dynamite drop-in, Monty.”  Precisely.  Broadcasting school is really paying off for me.  Thank you.

As previously mentioned, the PGA Championship was played here in 2004 as well, but I’m not sure how much pertinent information you can glean from a tournament that took place 11 years ago.  However, if you’re feeling nostalgic, knock yourself out:  The 86th PGA Championship.

As far as statistics go for this week, the experts were pretty much on the same page.  Here’s what they think you should be focusing on.

And here are the specific players the experts like.  The Consensus has been pretty strong of late, take note.

Is this the last PGA Millionaire Maker of 2015?  The FedEx Cup is coming up, but the Tour Championship has a field of 30.  Probably can’t do much in terms of DFS with that.  DK has it’s WFGC at the Deutsche Bank Championship, so maybe there?  Who knows.  This may be your last chance to win $1,000,000 playing fantasy golf this year, so make the most of it.  Get that cash. 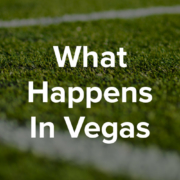 What Happened in Vegas? - Wild Card