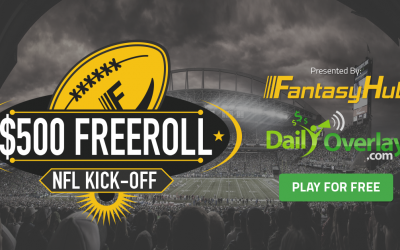 FantasyHub is not like other Daily Fantasy Sports game sites. Sure they still have daily contests for a variety of sports where you can enter to compete against other players to try to win yourself some money, but they also take it a step further by raising money for charity along the way.

FantasyHub has a percentage of the entry fees involved in the contest go to the charity of the winner’s choosing. So when you are entering a contest you not only build a lineup to fit within the salary cap, you also get to choose a charity where some of the money from the contest will get donated to if you are one of the winners of that contest. How much gets donated is dependent on how high you finish in the contest and you can see the charity payout structure right along with the player payout structure for each contest. According to the FantasyHub lobby, they have raised $141,571 so far.

As for the website and gameplay itself in the few days that I have been a registered user, the interface seems very clean and easy to navigate.  They have a variety of additional perks such as athlete sponsored contests, sign up bonuses, ticket bonuses and something called hot streak points that you can earn for things like just logging in every day or entering contests every day that can gain you access to freerolls. It looks like a good site and I am excited to start playing on it.

Here at DailyOverlay if you sign up for an account at FantasyHub this week you will get entry into a DailyOverlay freeroll contest with a total of $500 in cash prizes awarded. You will also get access to our beta version of the Exposure tool, which is a cool Chrome plugin for DraftKings. Head over to this article for more details of the promo and be sure to sign up before the NFL freeroll on Sunday.

The lineup structure at FantasyHub for the NFL consists of 1 QB, 2 RB, 2 WR, 1 TE, 2 Flex, and 1 DEF. The scoring is pretty standard and they award a full point per reception. Here are few picks that I like at each position based on the salaries. These picks are more geared toward a GPP tournament like the DailyOverlay freeroll this week, I will give some High end, middle tier and bargain picks at each position.

TE salaries at FantasyHub range from $3000 up to $7900 this week with Rob Gronkowski at the top end of the pricing before a big drop off to the rest of the field at $6100 or lower.